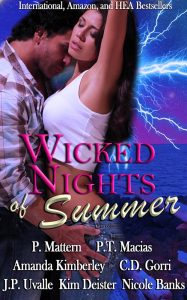 About Wicked Nights of Summer...

Summer reading just got hotter with the Wicked Nights of Summer anthology! This collection of paranormal romance stories is filled with sexy heroes and hellacious heroines in a tropical setting! Dive into romance with this sizzling boxed set that is guaranteed to set your summer on fire!

Get ready to heat things up with Vampires, Shifters, Angels, Mermaids, Hunters, and more in this sensual boxed set!

Ireland needed a break. It had been a rough year and she needed a fresh start. Her coven was embroiled in a civil war and when she refused to fall in line with the rest of them, she was kicked to the curb. By her friends, by her family, even by her boyfriend. She'd moved past the grief stage, even past the anger stage. For the first time in her life, she was free to do what she wanted. She had no one's expectations to fill but her own. So, she decided to celebrate. She bought herself a three-week vacation to Hawaii. No responsibilities. Just fun in the sun and time to figure out what was next for her.

When Sully brought home two tickets to Hawaii, he thought Kallie would be thrilled. He'd envisioned three idyllic weeks on a tropical island. Swimming in the ocean, laying on the beach, catching a few waves, and eating in world class restaurants. But within an hour, he found himself holding an extra ticket as he watched Kallie put the last of her bags in another man's truck. He'd torn up that ticket and flushed the pieces down the toilet. But he still had every intention of using that other ticket. Maybe some time alone was exactly what he needed.

My novella will be re-released in the future as a full-length novel.